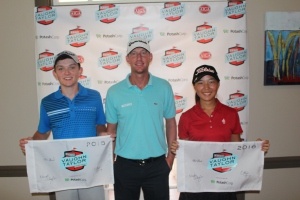 EVANS, Ga. – Alex Shead began the week with no college golf offers as he prepares to enter his senior year of high school.

He can soon expect that to change.

“I really wanted to win this tournament,” Shead said. “I had been playing great coming in. To finally win one and finish it off feels great.”

It was a big week for the three homeschooled Augusta Eagles golfers. While Shead claimed the victory, his teammate, Montgomery Harrison, who earned a spot in the tournament through Sunday’s qualifier, closed with 74 and tied for fourth. Colson Herrin, another Sunday qualifier, shot 80 and tied for 39th.

“It shows we can compete with pretty much every team around here,” Shead said. “It’s good for Montgomery to finally get a good tournament in against a big field. It’s great.”

“I played very well,” said Harrison, an 18-year-old Evans golfer who, like Shead, is entering his senior high school with no college offers yet. “I’m very happy with how I played. This gives me a big confidence boost.”

Elisa Yang of Norcross, Ga., won the girls competition in dominating fashion after closing with 70. The Georgia commit was the lone girl under par all week, finishing with a 211 total for an 11-shot victory over Gabriela Coello, another Georgia commit.

Yang chipped in for birdie at No. 1 and then rolled in a 36-foot birdie putt at No. 3 and put the rest of her round in cruise control. Yang led the field with 13 birdies for the week.

“One of my goals was to shoot consecutive rounds under par and I did that,” said Yang, a rising Wesleyan senior who wore red and black in the final round. “And another goal was to win an AJGA event. It feels great to win after all the hard work I’ve done.”

Entering the final round with a one-shot lead, Shead got off to a strong start in the final round when he spun a 105-yard sand wedge shot into the hole for eagle at the par-3 third. He followed with a double bogey at No. 4 and then bounced back with a pair of birdies at Nos. 5 and 6.

The 18-year-old Shead admitted to being “very nervous” on the back nine, when he led by one. Slayden birdied Nos. 12 and 13 to take a one-shot lead, but Shead rolled in a 20-foot birdie putt from the fringe at No. 15 to tie for the lead.

After striping his drive at the par-4 17th, Shead watched Slayden hit his ball left into the trees.

Slayden went on to make double bogey, giving Shead an opportunity to close the door on the tournament. Instead, he lipped out a two-foot par putt.

Up one entering No. 18, Shead hit his drive into the middle of the fairway and knocked his approach to 16 feet. While Slayden missed the green and made bogey to finish with 71, Shead two-putted for par to seal the victory.

He is playing in a U.S. Amateur qualifier, Tuesday and Wednesday, at Horseshoe Bend Country Club in Roswell, Ga.

He’s also entered in an AJGA tournament next month in Tennessee.